Summer weekends are made for road trips, and this past weekend, Stanton, the girls and I drove two hours east to Connecticut to visit with family there. We set out on Saturday morning.

Grace and Anna had insisted on packing their own bags. Grace had filled her Little Mermaid suitcase (it had been mine, 30 years ago) with books, toys and some of her favorite clothes. Anna, meanwhile, had stuffed her entire underwear drawer into her striped backpack. Just underwear, and a box of Band-Aids. I had some extra things for both girls in my own big bag.

Five minutes into our drive, as if on cue, Anna asked if we were there yet. Not yet, we told her. “Here,” Grace added, passing Anna a coloring book and crayons from the Little Mermaid suitcase. “I brought you an activity.”

I turned in my seat. “Grace.” My older daughter smiled. “That was so thoughtful.”

“You’re so thoughtful too, Anna.”

Summer weekends are made for road trips…

We drove across the Castleton Bridge, the Hudson River below us glistening bright blue in the hot sun. The radio station had been static-y, but then Elton John’s voice glided through the car.

We had a lovely visit with my cousin and her family. Because we were in the midst of a heat wave, we stayed at their home for most of the day, enjoying catching up and playing with the girls. There were burgers and, later, takeout pizza from the family’s favorite local spot (every family has one), complete with Funfetti cupcakes that the girls got to frost and decorate.

We were all thankful for the time.

Stanton, the girls and I stayed at a hotel overnight, and then headed an hour north to Amherst, Mass. One of the beauties of New England is that so many cool places exist within just an hour or two’s drive. Our next destination: The Eric Carle Museum of Picture Book Art.

We wanted to have lunch before getting to the museum. “Can we find a McDonald’s?” Grace asked.

I groaned, but Anna cheered. “I want a McFlurry!”

“Why don’t we look for a cool little local place?” I suggested. I glanced at Stanton; he shrugged. He would have been happy with a Big Mac himself. 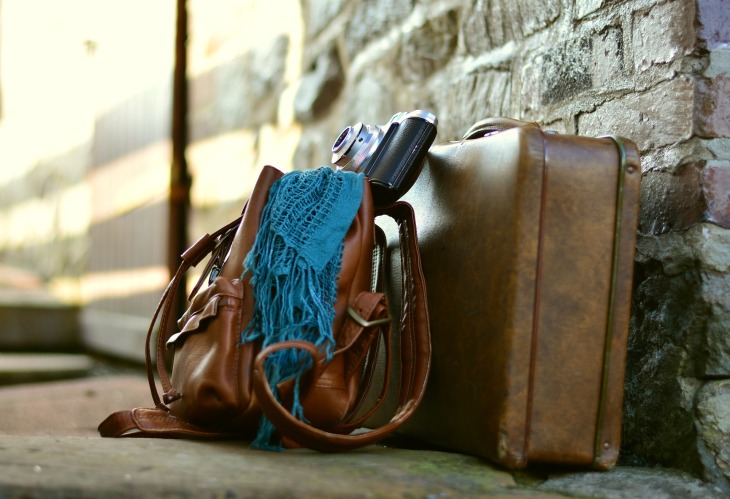 We ended up stumbling across Atkins Farms, which perfectly fit the bill of “cool little local place.” At the deli, we ordered grilled-cheese-and-bacon sandwiches for the girls, and Italian grinders for the grownups. We sat at a four-top with a view of the expansive country market: wooden cartons of rainbow-colored produce, fresh flowers galore, the aroma of freshly baked cider donuts everywhere.

“You say that about every place,” Grace said.

After lunch, Stanton, the girls and I had such a good time at The Eric Carle Museum (just up the road from Atkins Farms). Stanton truly could have stayed another hour or so, working on a collage in the Art Studio or making music on the large, outdoor xylophone in Bonnie’s Meadow. But friends had recommended we check out the nearby Beneski Museum of Natural History, and the girls wanted to see the dinosaur skeletons and footprints there. So we hustled over and had another fun museum visit.

“I don’t think we could have planned a better road trip,” I said, as the four of us climbed into the car and began the 100-mile drive back home. Soon after, the girls fell asleep in the backseat. I sighed, content.

And that is when the air conditioning in the car stopped working.

We sat at a four-top with a view…

Around 5 p.m. Sunday on the East Coast, the heat index hovered around 100 degrees. Stanton pulled over into a service plaza on the Massachusetts Turnpike. I woke up the girls and got them out of the car, while Stanton popped the hood.

I explained that the AC wasn’t working. The girls asked if Dad could fix it. I glanced at Stanton, who appeared to be consulting Google for auto-repair tips. Hmm. “I don’t know.”

We entered the service plaza, and walked right into a McDonald’s. The girls’ eyes lit up. “Mom, can we get McFlurrys?”

Grace got an M&M’s McFlurry, while Anna opted for the new flavor, Galaxy Caramel. (Just FYI, the Galaxy Caramel McFlurry is extra sticky.)

After a while, Stanton joined us. He shared the unsurprising news that we wouldn’t be able to fix the AC then, and would need to drive the rest of the way with the windows down. Not the end of the world, we both agreed.

Back in the car, we put the windows down and started home again. Grace observed that the ride was noisy. Anna pulled her sneakers off, then aimed one toward the window.

“Don’t throw that out the window,” we all yelled.

Stanton glanced at me. “This will be a funny story someday.”

“Today is not that day, but yes, someday,” I agreed.

Once, Grace asked me what kind of stories I write, when I submit fiction to literary magazines. Usually, stories about families, I told her. Of course, each family is imperfect in some way, because nobody wants to read a story about a perfect family (or a blog post about a perfect road trip 😉 ).

The truth is, the best stories are the ones from our own lives, from the times with our own families. Even when things didn’t go exactly as planned, or veered off course toward the end. Possibly especially during these times of adjustments and off-road adventures.

One thing I know for sure: The best stories happen when we’re with the ones we love.

Like what you just read? Then check out Melissa Leddy’s newest short story, “Backtrack.” An engaging read that’s can’t-put-it-down good.